Early on a cool, damp morning last week, I met Ron and Belinda Jacob at the Savannah Botanical Gardens on Eisenhower Avenue. The fog had crept in on little camellia feet.

We were alone there, whispering in the quiet mist, with only the clear call of a tufted titmouse echoing from the bare trees. The Jacobs were leading me to see the Ann Reinhard, a camellia that grows only in the Savannah Botanical Gardens. Against its dark green leaves, its red blossoms seemed to cascade like a haunting flurry of poppies on Armistice Day.

The camellia was discovered growing in the Savannah Botanical Gardens some 20 years ago, but until it flowered, no one knew what variety it might be. Last February it bloomed, and local camellia expert Gene Phillips determined it was a hitherto unknown variety.

It is what is called a “chance seedling,” a plant that has come from a natural pollination, a seed formed by serendipity. On some past warm winter day, the right encounter of a bee carrying pollen from the anther of one flower to the pistil of another started the Ann Reinhard life cycle.

The Jacobs and the staff of the Savannah Botanical Gardens began the process of submitting the previously unnamed camellia for inclusion in the national Camellia Registry. They cast about for an appropriate name, when everyone seemed to have the same thought at once to name it in honor of Ann Reinhard.

The beautiful circa-1840 German-vernacular building that sits on the edge of the 10-acre Savannah Botanical Gardens is named the Reinhard House. It first stood on the Reinhard Farm near Wheaton Street downtown. Indeed, eight acres of the farm were purchased in 1853 to become the Catholic Cemetery.

The house was slated for demolition to make way for the Truman Parkway. It was saved and moved in 1992 by the Savannah Area Council of Garden Clubs. It now serves as the SACGC headquarters and as the information center for the Gardens.

A year ago, I saw the Ann Reinhard at the Jacobs’ invitation. She had only a few blooms then, but she is covered with flowers now. Ron said the bitter winter of 2018 seems to have caused Savannah’s camellias to rebound mightily this year.

He was captivated from the beginning with the simplicity and elegance of the Ann Reinhard’s single (one row of petals) blossoms. Camellias originated in Japan, where simplicity is valued aesthetically. Indeed a small, red, single camellia can be seen at Magnolia Gardens in Charleston, where it was imported from Japan in the 1700s.

The Savannah Botanical Gardens have 67 varieties of camellias, all but one identified. The Jacobs took me on a magical tour of singles, doubles, anemone forms, peony forms, rose forms, formal doubles — an enchanted walk, close to nature, next to Hospice House.

We visited the Tama-no-ura variety, a red-and-white single, similar to the Ann Reinhard. It was found in the wild on an island of the Nagasaki Prefecture in 1947 by a charcoal burner. With its white edging and golden stamen tops, one bloom seemed to float above the palm of Belinda’s hand.

The fluffy rose-pink blooms of the R.L. Wheeler variety hovered over a lush stand of azaleas. The Jacobs knew it originated in Macon in 1949. They showed me the reticulata hybrid Crimson Candles, its dew-covered rose-pink petals resembling a music-box ballerina.

I was struck by the Charlean, with large, pink-orchid petals and airy pinkish filaments. Ron pointed out that there is a story behind every camellia, and Belinda said they had met the flower’s namesake. The woman Charlean is the granddaughter of the originator, William Stewart of Savannah.

Ron showed me the Betty Sheffield with its loose peony form. It is whitish with blotches of red and pink and is noted for “sporting,” where different colors appear on the same plant. Like the Ann Reinhard, it was a chance seedling from Quitman found in 1949.

Our camellia journey took us to the majestic white Sea Foam, which originated in Fernandina Beach, the fluffy High Society from Albany, the luxurious Royal Velvet from California.

The Jacobs knew the names of every camellia we passed. They knew the legacy carried in those names. They knew the ethereal beauty. They themselves helped name the Ann Reinhard, who passed away in the 1800s. I saw on Phillips’ website a just-introduced pink lavender camellia, the Jennifer Ross, who has been in heaven since 2005.

Ben Goggins, a retired marine biologist, lives on Tybee Island. He can be reached at 912-786-6181 or bengoggins9@gmail.com.

On the web: See more photos with this column at savannahnow.com/accent/columnists. 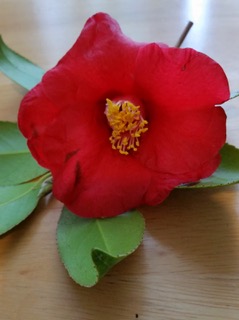 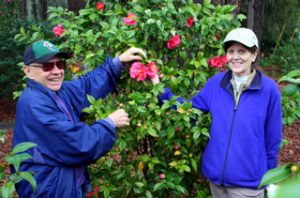 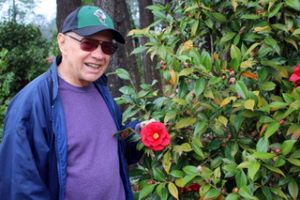 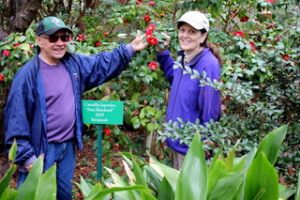 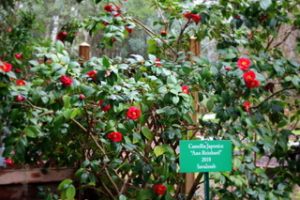 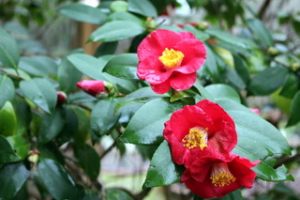 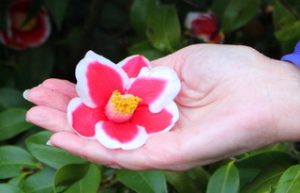 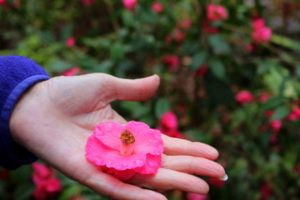 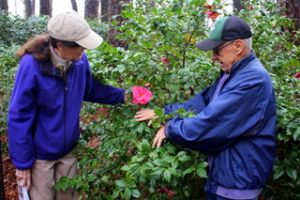 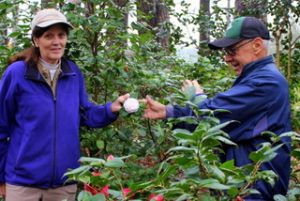 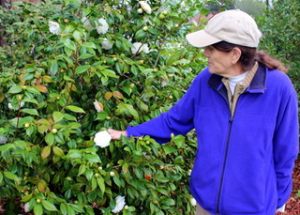 The SACGC, Inc. Botanical Garden is owned and operated by Savannah Area Council of Garden Clubs, Inc. The site was conceived and designed in the late 1980's as an all volunteer effort and is located just minutes from Savannah's Historic District.

The garden includes both formal and naturalistic plantings as well as a two acre pond, amphitheater, nature trails, archaeological exhibit and the historic Reinhard House.